Archive and discussion of the MicroPython Newsletter
Post Reply
29 posts

Welcome to the first issue of the MicroPython Newsletter! This newsletter aims to keep you updated on the development of MicroPython, inform you of new features and changes, of new hardware, as well as events and things related to MicroPython. We hope you enjoy these updates.

The first line of code of MicroPython was written on 29th April 2013 which is just over five years ago. By September 2013 basic Python code could run on bare metal, responding to a button press and flashing an LED. A month later a prototype pyboard had a REPL, filesystem and USB serial and mass storage.

Since then the original pyboard has sold a great many units and has seen use in a huge range of applications. And it is now time for the next generation pyboard, the pyboard D-series, or PYBD for short.

We have been developing PYBD for nearly a year now. The concept for the D-series of pyboards is a miniature DIP-style form factor useful as both a standalone board and an embedded component for use in final products. The focus for the design is on high performance with a small size and low power consumption, and robust real time behaviour. The target audience for the board is everyone: from beginners and casual users, to dedicated hobbyists and professional engineers.

The first boards in this series will combine an ST microcontroller with a wireless coprocessor module, and have the following features:
Having the wireless features provided by a separate processor allows the main microcontroller to perform real-time tasks, keeping the TCP/IP stack scheduled at a low priority. The code for the PYBD is based on the same stm32 MicroPython code that runs on the original pyboard, but with additional features to support the newer hardware.

The board uses advanced manufacturing techniques and is made as small as it physically can be. Here are some pictures of PYBD_F767 to get you excited: 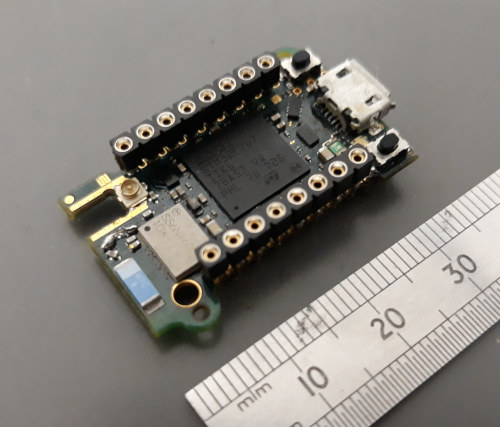 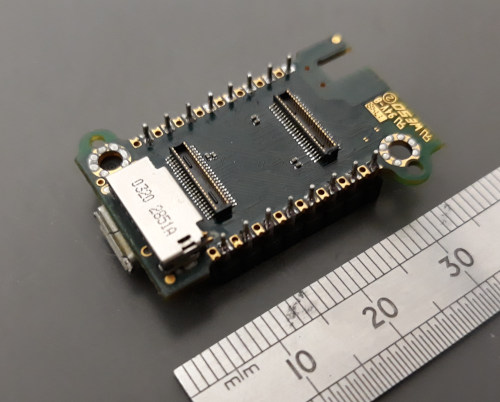 The prototypes have been thoroughly tested, the design is finalised, and initial versions of the PYBD are already being used in products in the field. Now it is down to the logistics of mass manufacture.

We look forward to making the new pyboard available within the next few months. Stay tuned for it!

Argh! So freakin' excited about micropython board with BT/WiFi radios out of the box!!! Available within "the next few months"? I know it's probably hard to say, but can you be more specific?
Top

Um, for this board. At OpenMV we're about to launch the OpenMV Cam H7. So, could we build off your design and work with you directly instead? We need WiFi and BLE... very much. We'd love to join forces. Our current design just uses the H7 and that chip is compatible more or less with the F7. We definitely need to upgrade to the H7 from the F7 for performance reasons... but, otherwise, I'd love to work with the same basic hardware. Most of our work was in software - we'd love to change the OpenMV Cam into a shield form factor use your module for the main board.
Last edited by kwagyeman on Tue Jul 03, 2018 5:02 am, edited 1 time in total.
Top

kwagyeman wrote: ↑
Mon Jul 02, 2018 7:16 am
Most of our work was in software - we'd love to change the OpenMV Cam into a shield form factor use your module for the main board.

That would be utterly awesome, it would then be a drop-in replacement, and all the shields would fit too!
Top

Damien wrote: ↑
Mon Jul 02, 2018 6:55 am
The prototypes have been thoroughly tested, the design is finalised, and initial versions of the PYBD are already being used in products in the field. Now it is down to the logistics of mass manufacture.

If it's not too late, would it be possible to add silkscreen on the bottom describing the pins?
Top

The combination of WiFi with Pyboard-level real time performance and interrupt latency is an absolute winner! Good to see a UFL connector on there, too.

I hope there will be an adaptor to provide jumper or breadboard access to more of the I/O.
Peter Hinch
Top

This is great news. I sure hope you can keep the price down. Maybe options for what's populated ?
Would love to see Kwabena et al be able to use the board and maybe have input if they need something.
Top

I"m in. This is great news. I just started using an Adafruit Feather Huzzah32 with a WROOM module. I installed Micropython over the weekend. This D Series Pyboard is certainly the next generation. I am looking forward to its availability.

The newsletter is another great idea. Please keep me on the list.

absolutely exited about it. You have my money too

That thing is so tiny and yet so powerful, really looking forward to it.