Re: Is the ISR actually running?

This is seen in the first picture of the original post. I am at the moment unable to supply a measurement of this with the minimal test case - will do tonight.

In this picture it is seen in green how the SPI CS is held low but never returned high, indicating the pico is stuck in the SPI.read function.

Edit.
I have added a measurement of the CS signal in the minimal test case. CS (blue) is held low while inside the ISR. From the first picture I gather that the ISR is indeed entered and CS put low. However it seems to be stuck in SPI.read().

I am unsure of what is happening in the second picture? does this indicate that the problem might not be in machine.SPI but rather a timing thing? 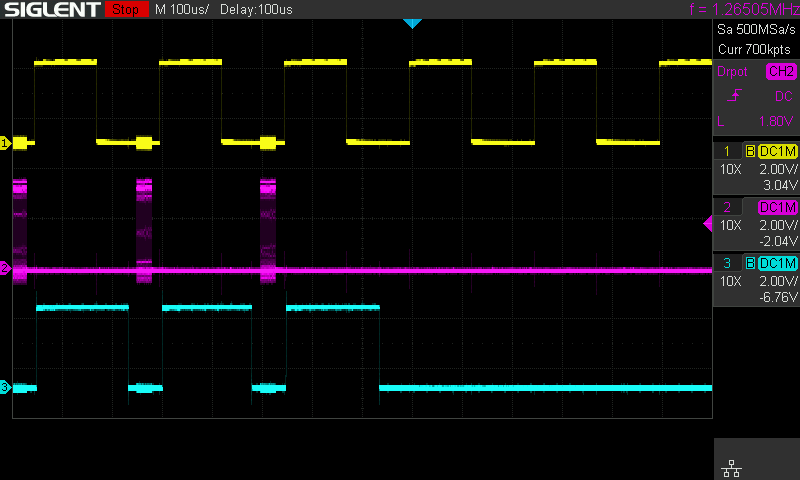 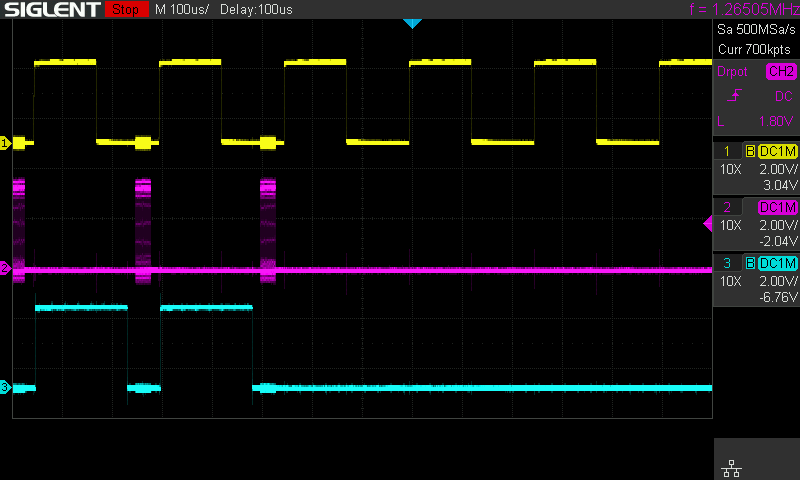 A possibility is the fact that SPI.read() allocates, which is not allowed in an ISR. This will occur even though you aren't assigning the bytes object to a variable. On most ports allocating in an ISR leads to a traceback, but perhaps the Pico fails silently. If it behaves in this way I would regard it as a bug.

To avoid allocation use .readinto with a pre-allocated buffer. Alternatively use micropython.schedule to run a soft ISR.
Peter Hinch
Top

Sharp observation. However, even without the SPI in the below even more minimal case, the issue seems to persist.

Here I have omittet the SPI and is just doing an IRQ on the generated PWM falling edge signal. 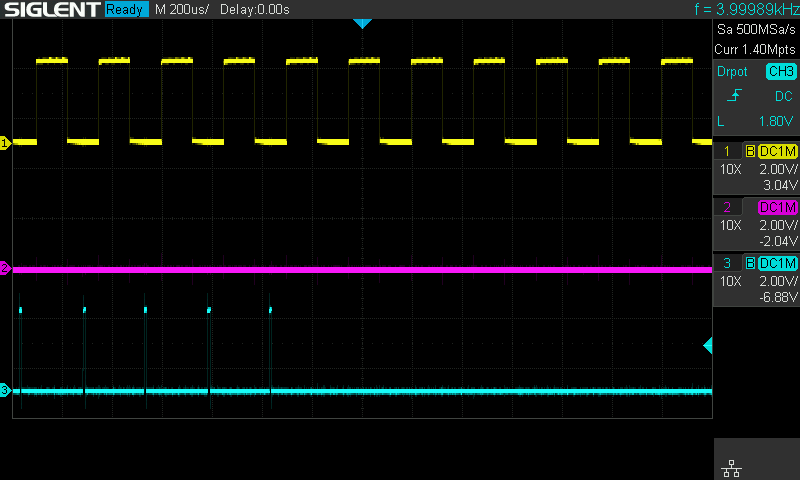 That seems to be the case with my test code which doesn't need any hardware connections or links; the 'inp' monitors the same 'pwm' pin ...

That consistently reports 400 or 401 as expected.

Something is preventing the callback from being called, preventing count being incremented.

But with "def Irq(*_):' we soon hit "MemoryError" which suggests to me that more garbage collection is going on in that case because disabling that causes a major problem.

I am not entirely convinced it is just the use of "*_" which is the problem. Given the issues with pin callbacks, timer callbacks, threading, I suspect there are some systemic issues playing their part.


And just for a laugh - Back to my original code; replace "time.sleep_ms(100)" with the functional equivalent of "time.sleep_us(100_000)" and, as described elsewhere, count is always zero.

BTW : None of this explains the PWM case.
Top

This strikes me as a clear smoking gun: it is surely a bug. There should be no GC taking place in this minimal example.

I suggest you report this on GitHub. If you prefer I will do so,
Peter Hinch
Top

If it is not too much of a inconvenience for you, I would feel more comfortable if you would. Thanks. I am not even sure what Github you speak of.
Top

When I change the statement for the square wave output from

the PWM problems described are gone.
It seems, that no problem occur, when I use strictly only integer variables an only simple bit operations.

It doesn't matter whether this output occurs in a timer interrupt or in the main loop ; In the interrupt, of course, the square wave output is more precisely matched to the sine output.
However, my target program is a DDS (direct digital synthesis), where the sine table has a fixed number of points and the output frequency is changed via phase steps (phase wheel, https://www.digikey.com/en/articles/th ... izers-ddss).
Here is the final script:

The floating point operation allocated RAM, the pure integer operation does not. It should also work with // instead of /.
Top

MicroPython sourcecode is hosted on GitHub. Raising an issue is the way to report firmware bugs, so hopefully this will be addressed by the maintainers in due course.
Peter Hinch
Top

The upshot of the GitHub discussion is that interrupts defined with machine.Pin.irq() default to soft ISR's (a fact which is documented and I'd failed to spot). For fast, deterministic handling you need to set hard=True. This means that you can't allocate in the handler, which rules out any floating point code. Also, declarations like

are invalid in a hard ISR because a 1-tuple is created and assigned to a variable _. Instantiating a tuple causes allocation. When you define the ISR as hard, this (correctly) raises a memory error. So the code should read:

My take on this is that there is probably no bug. Perhaps you might like to try these changes, first on your simple example, then on your actual code, and report back.
Peter Hinch
Top
Post Reply
20 posts