The official pyboard running MicroPython.
This is the reference design and main target board for MicroPython.
You can buy one at the store.
Target audience: Users with a pyboard.
Post Reply
3 posts • Page 1 of 1

Maybe a odd question, but I try to use a pyBoard v1.1 for running another application.

So went wnt the following way to get support for STM32-Boards (like the STM32F405 on my pyboard)
in the Arduino IDE:

On my system the pyBoard is shown as COM4: (while running MicroPython) and connected via USB

I do set the Arduino IDE to a generic STM32F405RG board and the transfer-mode to DFU
Then I connect on the pyBoard 3.3V and BOOT0 for DFU-mode (COM4: goes away)

Re: [Q] Programming the pyBoard v1.1 in Arduino IDE?

Re: [Q] Programming the pyBoard v1.1 in Arduino IDE?

@apples: from your Tutorial (Many Thanks for that) I had not to change variant.cpp anymore (FLASH_LATENCY_5)
(seems to be standard now for the STM32F4x group - wasnt anymore in the file) 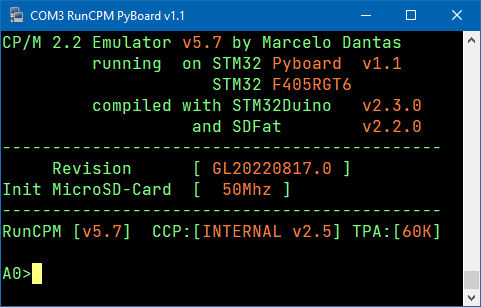