Welcome to the sixth issue of the MicroPython newsletter.

Many of you are wondering about the new upcoming pyboard D-series and when it will be available. Some people even bought one at FOSDEM earlier this year and are now waiting on the full release. We are happy to say that final testing and debugging of the hardware is complete and there is an initial batch of boards ready and waiting to go. 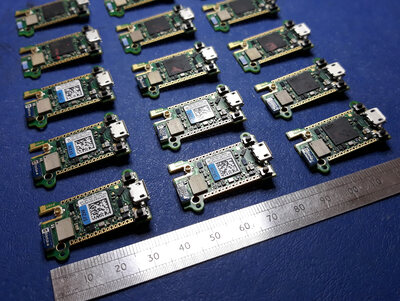 A lot of effort has been spent over the past months verifying the stability of the system and making sure it is suitable for robust embedded systems. The new pyboard uses a Cortex-M7 which is a high-performance CPU and we needed to understand the full implications of the advanced features of this CPU and their interaction with the rest of the microcontroller system. We did see some issues when using the external QSPI flash in memory-mapped mode which have now been resolved.

We are confident that this new pyboard will see itself as the heart and brains of many embedded systems in the years ahead, and has already been running for over 12 months in several real world applications. 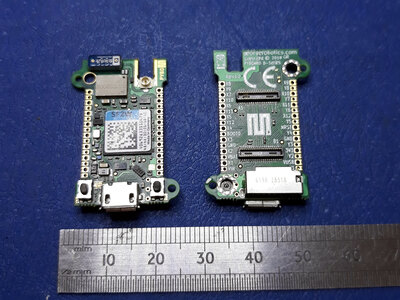 The pyboard D will be offered in two variations, the standard model with an STM32F722 MCU, and the high-performance model with an STM32F767. The standard model has 256k RAM, 512k internal flash and single precision hardware floating point, while the high-performance model has 512k RAM, 2Mbyte internal flash, double precision hardware floating point, Ethernet (via adapter board), DCMI interface and other peripherals.

The common hardware features of both variants are: Even though the Cortex-M7 is high performance the pyboard D is still a low power board. Running at just 120MHz (reduced from its maximum of 216MHz) the pyboard D is slightly faster (on computation-based benchmarks) than the original pyboard with an STM32F405 running at 168MHz, yet it consumes about 10% less power at this frequency.

On offer will be versions of the pyboard D with and without the Murata wireless chip. With the wireless included, the low-level parts of the WiFi and Bluetooth stack run completely independently on their own microprocessors within the Murata 1DX, and the upper parts of the stacks run at a low priority on the main MCU. This is critical to allow the board to be suitable for real-time applications, with low and predictable latency for peripheral IRQs.

But with the pyboard D there will be no compromises! Even with real-time behaviour of IRQs the WiFi still retains high throughput: measurements show at least 800kbyte/sec for a TCP connection when both sending and receiving data. The WiFi also has very low power consumption: running in station mode connected to an access point requires less than 2mA of additional current. Combining this with the light-sleep mode of the MCU, one can build a HTTP server that is in listening mode with less than 1mA total current consumption of the entire board (at 3.3V, when certain conditions are met).

We have also developed an initial range of adapter boards and add-ons for the pyboard D-series. At the core of this system is the WBUS header, a fine-pitched 40+40-pin mezzanine connector. This is used to gain access to all the power and IO pins of the pyboard D, bringing them out to a motherboard built for a specific task. To start with we have DIP28 and DIP68 break-out boards. 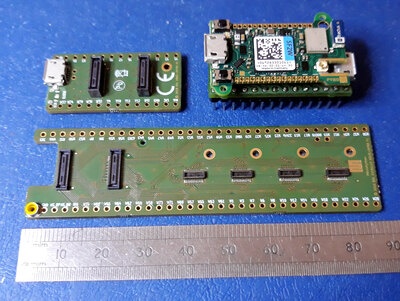 Within the WBUS connector can be sandwiched certain types of add-on boards, such as high-capacity, robust eMMC storage, or extra SPI flash. 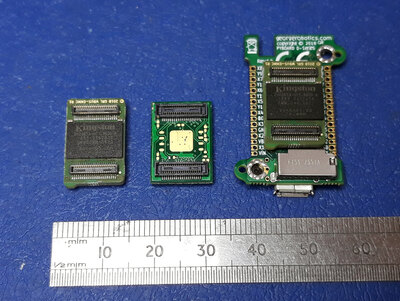 For sensors, actuators and other add-ons we have designed a tile system around a 20-pin mezzanine connector. The base tile size is 12x12mm and they can be arranged in a grid. Current tiles include a 6x6 RGB LED array, a temperature/humidity/optical sensor, and a inertial sensor. 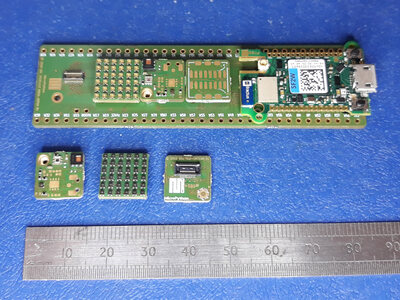 And best of all the new pyboard D runs MicroPython just as well -- if not better -- than the original pyboard 1. We are very excited about it and aim to make it available for purchase this week. So stay tuned!

(Please note that the specifications given above are indicative only and may change. Also, some features may not be available in software in the initial release.)

This is great news

, and eagerly awaited by lots of us (I think).

How can I get one, or at least put my name down to get one in the not too distant future? I intend to design an IoT course based around these modules (along with lots of other background stuff), but I need to be sure of getting them - one initially, then perhaps 20 by September.

Where will I be able to buy them, and what is the pricing structure?

Really exciting Damien, congrats! Looking forward to getting my hands on a Pyboard D to put it through it's paces!
Top

The end of 1st post says : "...aim to make it available for purchase this week".

I am looking forward to availability. I will be checking the store daily.